Its happy days this weeks as I have finished  my first round of stripped plates and bowls. This is a dinner set for my sister.

The one lesson learnt this time was that my clear glaze is applied a little think. Mental note for next time is thin down my glaze just a bit! 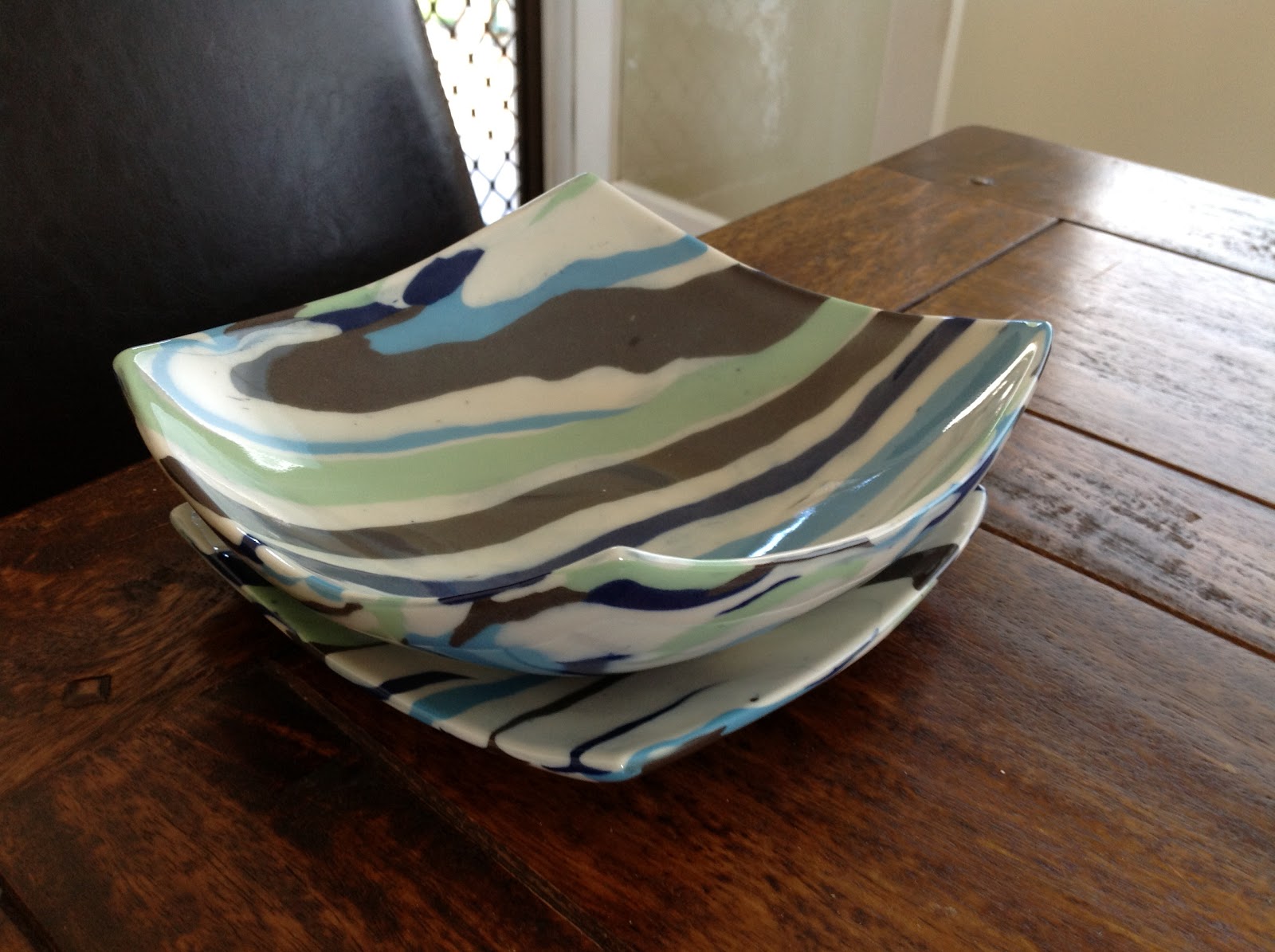 This one below is stenciled stained clay with white slip. Its something I did at TAFE ages ago and thought I would reinvent it a little. 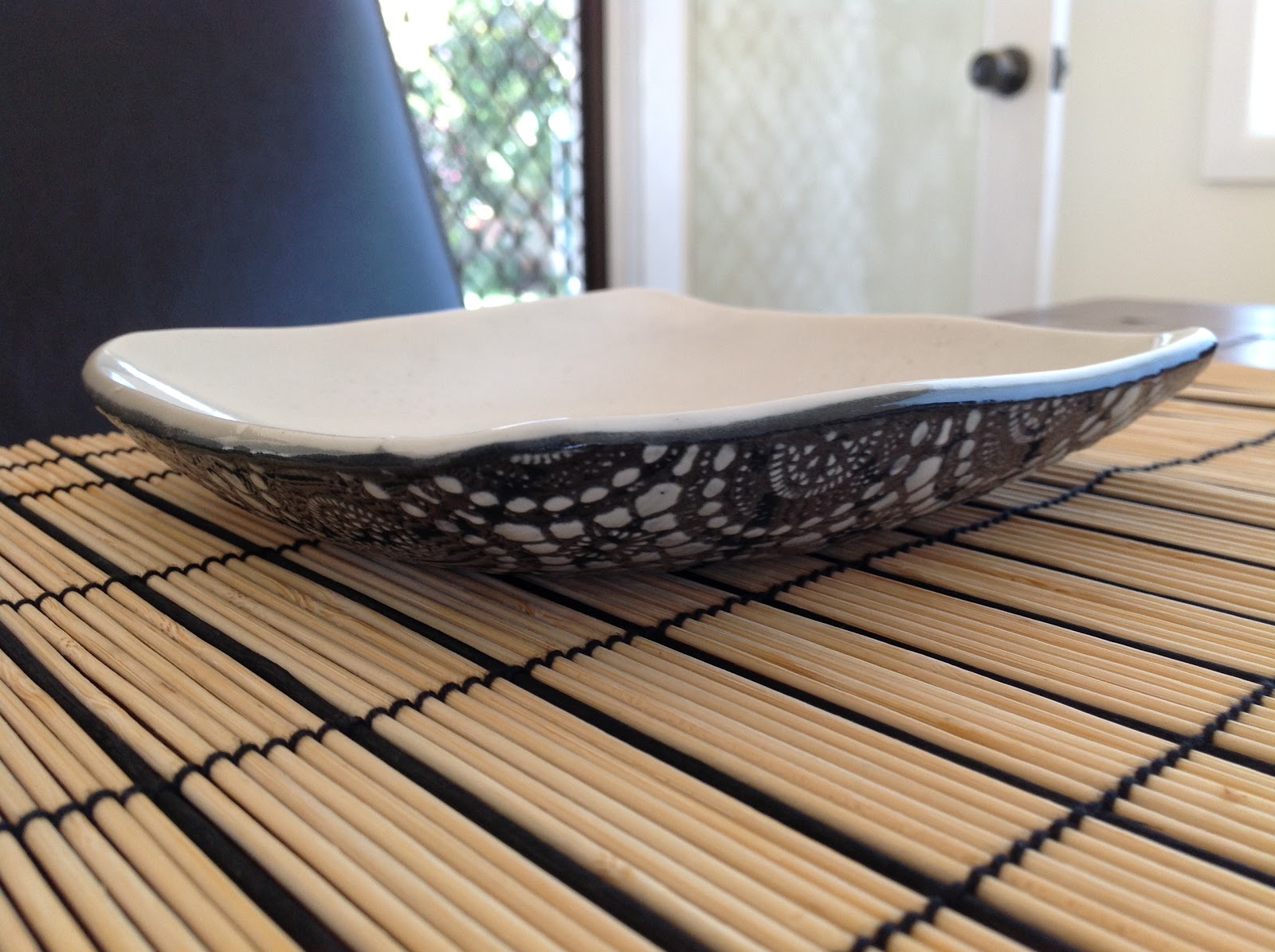 Another attempt at some stencilling with a different pattern
﻿ 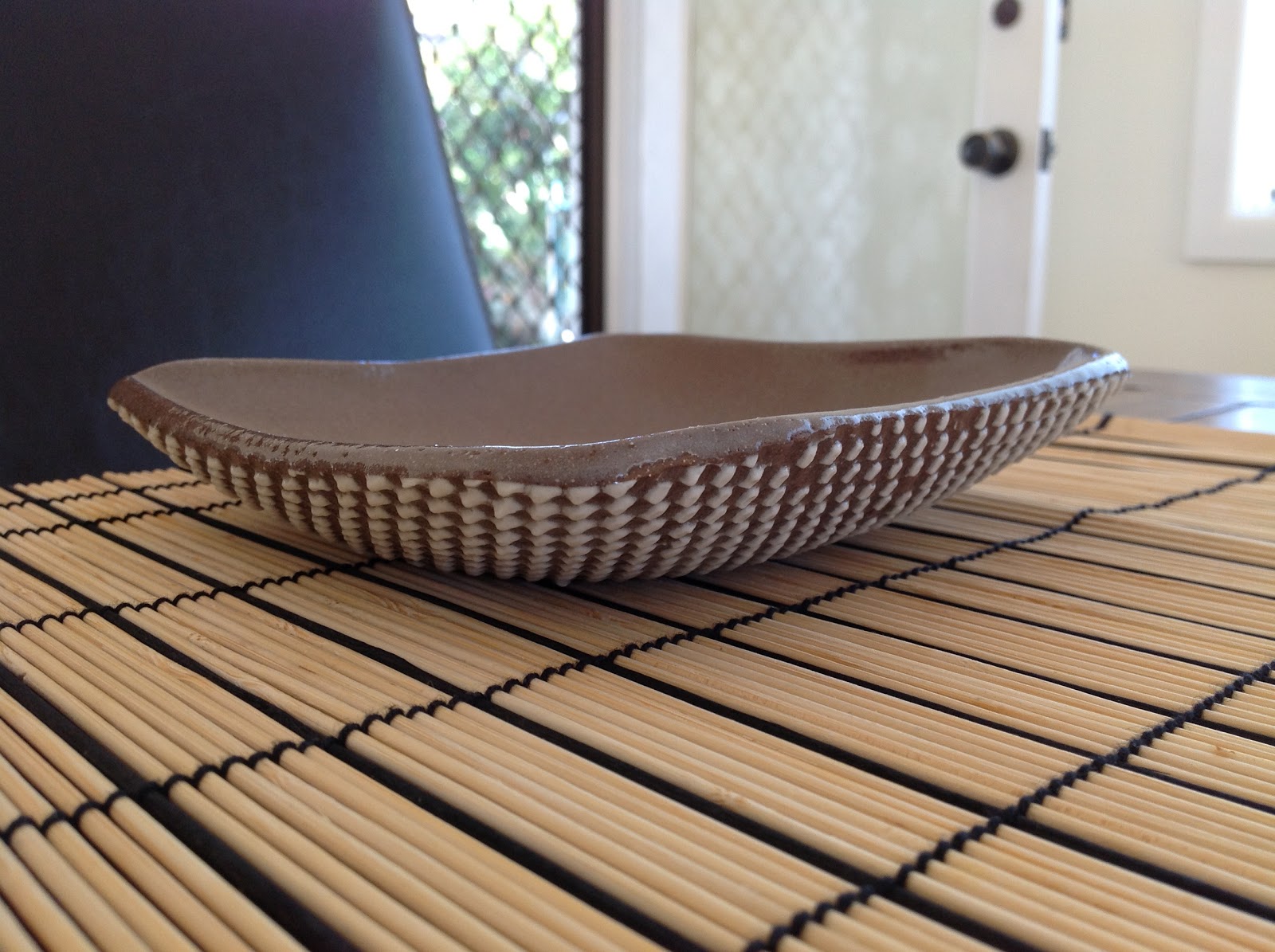 Off the pottery topic I am very sad to hear that Google will no longer be offering Google Reader. I am going to miss such an easy way to keep on top of all of your blogs. Does anyone else feel the same way? What do you use to keep track of your bloggy mates?
How does the Mud Colony crew feel about this??
Hope everyone has a great week!﻿

Posted by Amy Orsatti at 4:44 PM No comments:

After an affair with mid-fired clay which ended badly I have gone back to porcelain. The last goodies out of the kiln included some ceramic pendants which are now for sale.

$10 excluding postage - I will get a quote for postage and just charge the postage cost. If you want I can put it on a leather chain also.

So if you are looking for some presents on this raining weekend look no further!!

Thanks to Feeling Inspired located on the Northern Beaches in Sydney. A great store with loads of beads and jewellery making stuff.

﻿
﻿
Now for Mud Colony mates. This week, apart from completing the above, was a big week. I was able to spend a considerable amount of time in the studio to clean it up and get it working better.

Projects on the go at the moment include working on some lamp prototypes. Unfortunately I didn't have much success.

so next week I try again.

I have also being working on are staining clay and then stenciling it. I did this a while ago and thought I would give it another go. Check the bowls out one my website. However these bowls are pocelain and the previous bowls were mid fired terracotta.

I am after somewhere that makes stencils. Has anyone does this kind of stuff before? If so let me know. 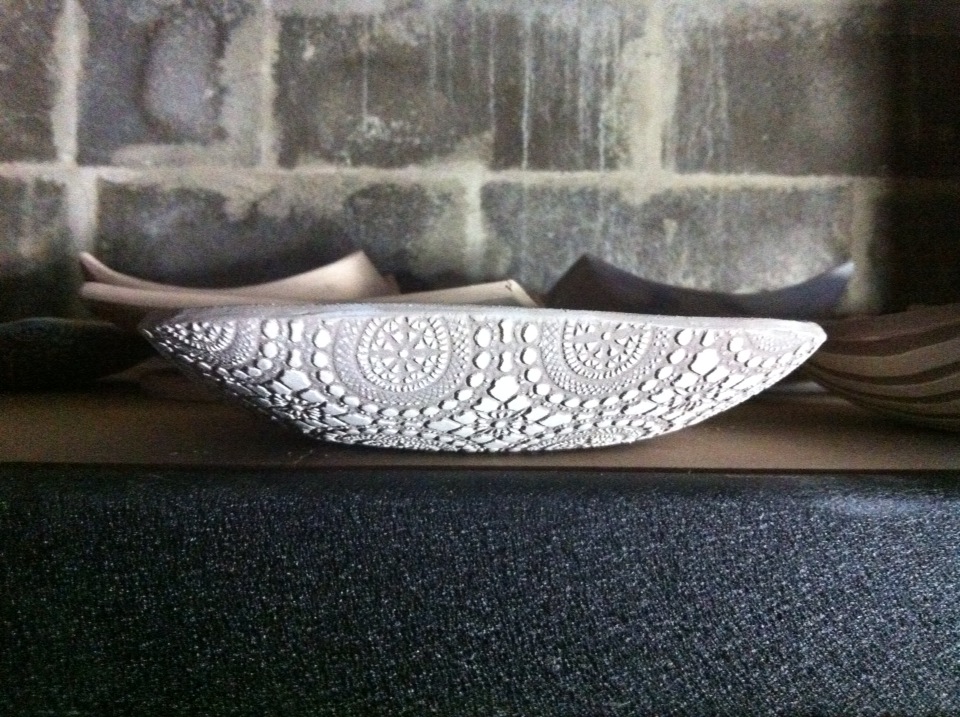 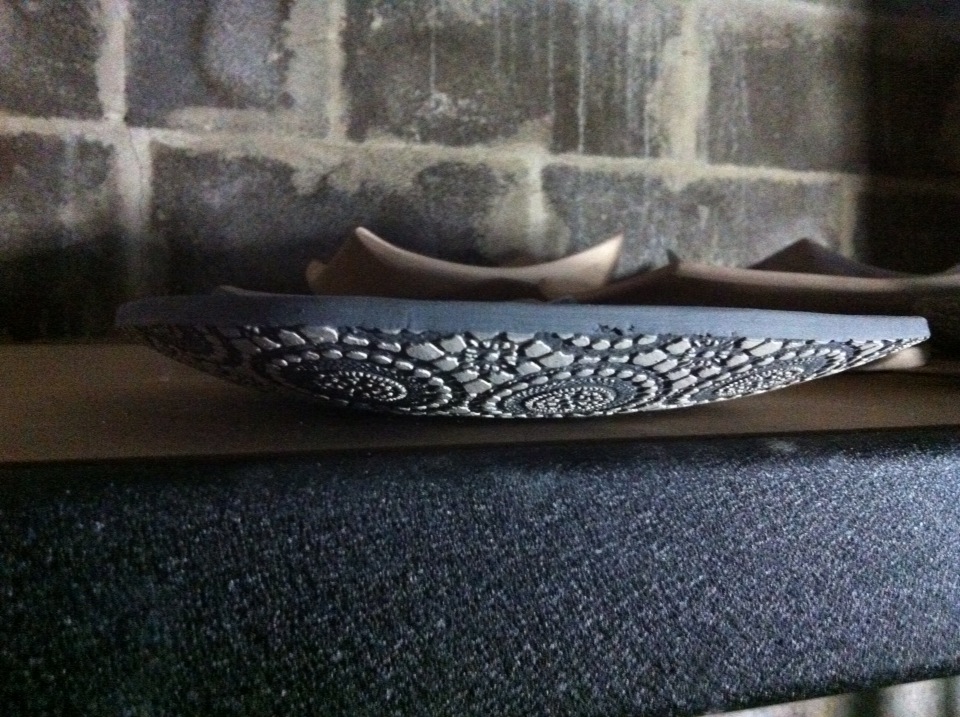 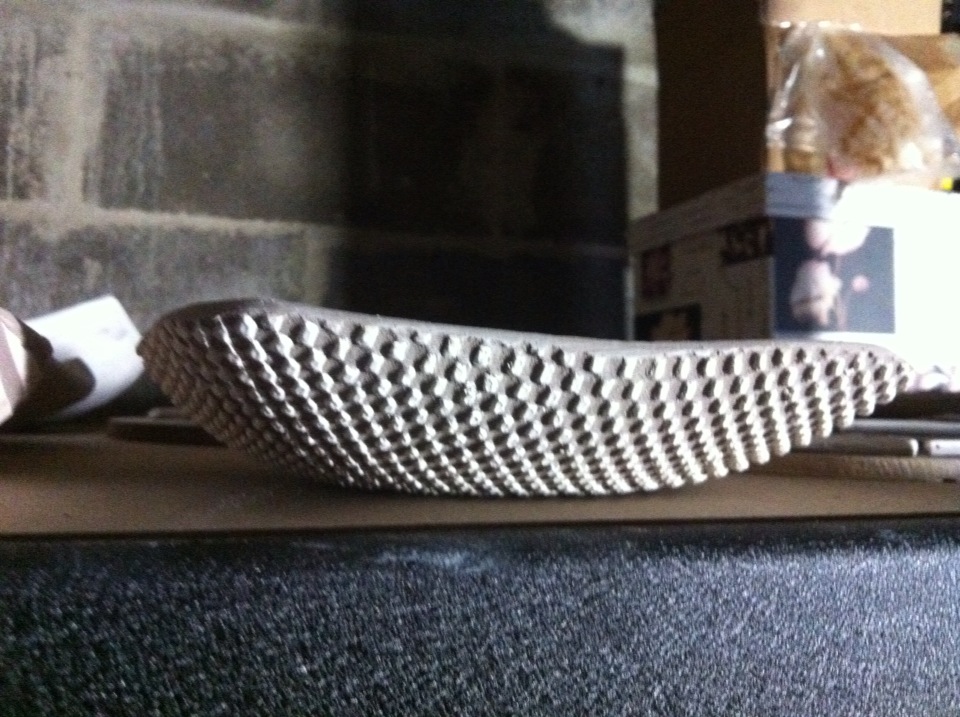 And that is about all from me. Have fun in the mud!﻿

Posted by Amy Orsatti at 5:00 PM No comments:

The first goodies out of the kiln for this year are some ceramic pendants. However I am having a little trouble working out which way to hang them in terms of bails etc... 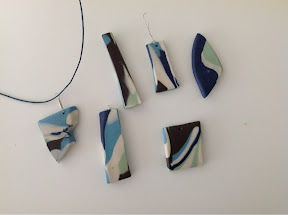 Are there any suggestions from Mud Colony followers??

That's is all for this week. Hope you all had a successful week in your studios!


- Posted using BlogPress from my iPad

This last post for Mud Colony sets up an ambitious weekend.

I often make lists so this is one for this weekend

Two of which I have already completed. Namely finding some pin bails for some pendants and flattening the bottom of my plate mould so my plates don't spin.

It's amazing how timing is everything in ceramics. The neriage and stripped slabs are top of the list so I can get enough for a bisque firing and then a glaze firing for my cone 6 coloured clay. I got distracted and started working back in stoneware but would like to finish off some cone 6 stuff so I can end the year with "something complete"... Oh the long process!!

Started with finishing off some neriage.

Then I got my new plaster mould made and setting

The next was the make some more stripped plates. Below is the neriage plate at the back and two stripped bowls which I am pretty happy with 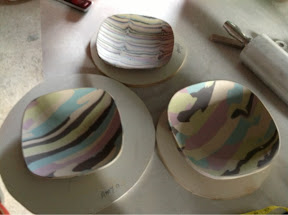 As this is not glazed yet its hard to tell colour. Here is a test to give you an idea of the finished colours 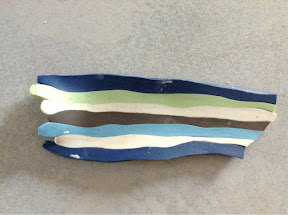 Sunday was less productive but I did get my dinner plate mould finished which is great. 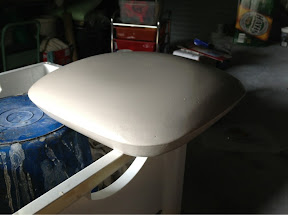 All in all a successful weekend. The only thing not complete was the throwing of some mugs but I will get to that this week I think.

Thank you for reading my blog during this year all the best for the festive season and a very productive muddy new year to the Mud Colony mob.

See you all next year!

- Posted using BlogPress from my iPad

On the way to my last bisque firing I lost my one neriage bowl. A bit disappointing and I thought nothing to pitch it, but then it niggled at me and I decided to make another. I'm amazed that it didn't take as long as what I had in my head. Probably because I had done it before.

This is the latest results from the bisque firing for my cone 6 stained clay for my sisters tableware. Everything survived this round. Keep your fingers crossed for round two. 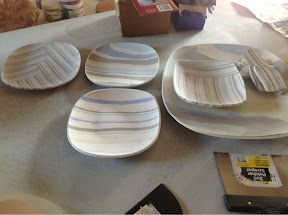 This is the new neriage bowl and plate. 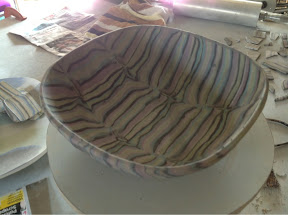 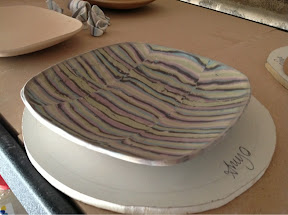 I have also decided to make some brooches or pendants with some of the of its because I loved the shapes and colours of the clay.

Some nice kiln fillers to brighten the day! 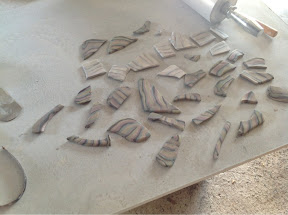 Now to do some glaze work and get some stuff done before Christmas!

It is amazing how such a hot day can have things dry in no time. I can't believe how hot it is today in Sydney.


- Posted using BlogPress from my iPad

Since moving my studio to the garage I have been able to get heaps of bowls made.

Even after a disastrous day where one of my plate moulds threw itself on the floor in protest. So a new mould was born!

Old mould then new mould below! 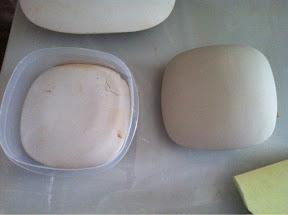 This is the end of a few days work. Pretty good considering I only get about 3 hours a day to do my own thing due to my cheeky monkey.

Hopefully there is a firing next week. Which reminds me I need to get some 06 cones.

Posted using BlogPress from my iPad

Posted by Amy Orsatti at 4:46 PM No comments:

3D where is it going?

I am always interested in change. One I find particularly interesting is the development of 3D ceramic printing and its part in the ceramics industry today.

Time and technology has changed many art and craft practices. I was trained in photography at a time when digital photography was just starting, incredibly expensive and just not comparable to the normal analogue practice at the time. Within 5 years of starting my course digital photography had taken off and was fast becoming industry standard. My first job leaving uni was the scanning and "photoshopping" of slides meant for desktop publishing applications. You wouldn't even use film anymore in this instance and the task is redundant.

In the distance I can see 3D ceramic printing opening up a wealth of options for the ceramic artist today in terms of making. How far that distance is is any ones guess. One company that is making leaps and bounds is a US company called Shapeways. Some of the pieces produced are really interesting although not that interesting in terms of design yet. The users are generally those trained in 3D CAD applications who from what I can tell aren't really designers of ceramic works, or never practiced the craft. I may be wrong though. Either way it seems there is still a long way to go to making this technology work for either practicing designers, commercial manufacturing or the hobbyist.

Hyperclay held at Object Gallery in the middle of the years also addressed this technology. Is the technology part of ceramics or part of engineering or the printing industry? I would say a bit of all. As with most technologies in their infancy there is still ongoing research as to the best method of production. Robert Bamford went down the path of printing like a laser printer using clay with a slip like consistency. From the piece I saw it looked like precision was difficult and I would also image size would be limited as the piece would need time to dry unless there was another way to support it. Overall this method seemed doomed to me. Unless some method of introducing a mould was made, which I guess would defeat the purpose.

Shapeways has an interesting approach of using laser printing to cut into dry blocks of clay, so the work is cut out of clay. I find this technique really interesting. I would imaging because of the technique the usual process for firing may differ as the clay body would most likely differ from the clay bodies used today in production work. I would love to know more about this but I imagine that its not something that is being published that often as it could be patented. How does shrinkage work with a dry clay body being fired? It would shrink at all in the first firing??  There would have to be something fluid holding the clay together in the block unless it is that compressed it doesn't move?? So many questions...

I can imagine one day that you could print a mug or your dinner set as easily as you can now print an image on a mug. Given you know how to use a 3D CAD application which are also getting easier day by day, I can see it one day happening. So how does that effect the ceramic industry. Is it a good or bad thing or does it just give ceramicists another "tool". Mind you the work would still needs to be fired and glazed. I would image you would complete your design and select from a range of glazes and then get the product. So as long as your idea fits into those parameters you would get the object that you want. I would imaging that many "ideas" would still fall outside of those parameters while the technology is developing. However its an interesting concept. It might be a much easier way to product small run customised wares. Where would printers fire this work? Is it viable?

It could mean lots of interesting avenues for the craft and may see students and designers coming back to the medium. What does it mean for commercial mass production?? Will the focus move off China?? Will custom work make a come back?? Does it make ceramics more accessible to anyone interested in DIY or homemade craft?

I think if you let it take a negative effect on your practice then it will. If you compete with it rather that accept and encourage it, it could cause some damage to your business. Personally I would love to give it a go.
Posted by Amy Orsatti at 7:29 PM No comments:

Promote Your Page Too